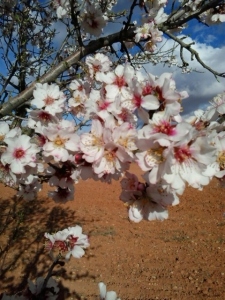 Some people prune old trees in a very aggressive way, claiming that it rejuvenates them. I think otherwise, since the trees that I have observed after that seem to generate much wood and water shoots but not so much fruiting structures. After reading about it, I consider that pruning mature trees should be done in a conservative way. Research has shown that pruning does not increase almond production. The intervention should be planned to achieve other goals: management, safety and sanitation.

In a properly managed orchard, this intervention is easy. But in my case I have to do a more demanding job because I have to deal with trees that have been neglected for many years. In fact, the state of the orchard suggests that trees have not been pruned since they were very young.

In any case, the rules are simple: on the one hand eliminating dead wood and diseased branches, on the other hand eliminating branches that are an obstacle for maintenance or workers. I also have a look in the inside and decide if one or several branches are worthy removing in order to facilitate air and light entering the tree canopy. I avoid trimming old branches in order not to generate water shoots in spring. I prefer eliminating the few required branches from the base and keeping the remaining branches untouched.

That is what I have done today and the orchard image has improved much. This work is worth doing once. In the upcoming years I will just focus on eliminating sick tissues, such as almond mommies or fungus affected branches. September and October is a good time to do this because you can see bad looking branches easily. It is important to keep in mind that watershots will grow from the cuts next spring. Those watershots should be eliminated in June or July, otherwise pruning would have been counterproductive.